Getting the kids active this summer!

Getting the kids active this summer!

Two similar trends that have grown exponentially over time is children's access, addiction, and reliability to staying indoors with technology, and their resistance, opposition, and dislike towards going outside for physical activity. Most young kids nowadays are not being challenged physically to maintain their health; most choose to play video games, or choose to watch television, etc. as opposed to going and playing outdoors. 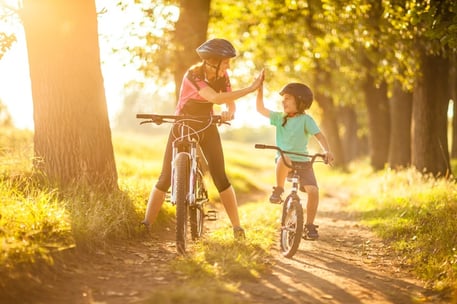 I was born in1994. I am 23 years old, and although I am considered young, when I was even YOUNGER, around the age of 8 or 9, I chose to go outside and play kickball in the streets with my childhood friends instead of watching Spongebob on TV; I chose to learn how to ride a bike from my parents instead of choosing how to play MarioKart on Nintendo 64; I chose to try out for sports (i.e., soccer) instead of sleeping in till noon wasting the day away. All of these active choices came from how my parents brought me up, which will be my pitch to the parents of the generations of kids younger than me.

I have seen so many adolescent children attached to iPads, smartphones, computers, laptops, the television, Snap Chat, Instagram, Facebook, etc. I have witnessed so little communication between children and their families at restaurants and friends with other friends at hangouts because everyone is glued to their phones!

Parents! Take the technological devices away for a few hours each day. Do not make is seem as a punishment, but rather as a reward. For example, maybe say to them, “if you go outside and play some basketball with the other kids in the neighborhood, I will let you play your game tonight before we eat dinner as a family.” Another example would be to stress the importance of family time. Make an effort to dedicate a part of the week to doing something active as a FAMILY, such as taking the dog for a walk in the neighborhood every Sunday.

If traveling on vacation, leave the iPhones and iPads in the hotel room. Go outside, rent some bikes, or hike a trail/mountain with your kids; take your kiddos to the swimming pool and let them swim laps or have fun, competitive races with one another; bring footballs to throw and catch, soccer balls to kick, or tennis rackets to swing. Come prepared to keep your kids active! Do not be lazy and succumb to the norm of letting your kids “chill” in the hotel room all day this summer playing video games.

Our children learn from the actions we set in front of them. If we lead by example and guide our children in the right direction of living a healthy, active lifestyle, they will most likely keep those same values as they grow older. By making the switch from keeping our children inside to freeing them to the great outdoors, this will help them grow strong muscles and bones, maintain a healthy weight, discover the world around them, and most likely help build their confidence!